Most would say Jack had a rough start to life. His parents say he is a miracle. The realities of Jack’s serious medical conditions began to unveil themselves only after his mother had an Emergency C-Section at 31 weeks. Now at age five, Jack has had eight major corrective surgeries, a series of scopes and MRIs, as well as several admissions into the hospital which almost always included administration of IV therapy.

Esophageal Atresia and Tracheoesophageal Fistula (EA/TEF) Diagnoses in the NICU

At a 20-week ultrasound, a two-vessel umbilical cord was discovered leading to more frequent ultrasounds and a close watch on mom Amanda’s fluids. Ten weeks later, her amniotic fluid was much higher than normal, and a visit to see a specialist was scheduled for the next day. She never made the appointment, as her water broke that same evening, and was admitted to the hospital for monitoring. “Because my water broke early, I was more susceptible than normal and ended up with an infection. On day five, our baby’s heart rate went up and he was born by emergency C-section.”

Soon after birth, the care team discovered a multitude of anomalies, where treatment decisions had to be made quickly to keep Jack alive. The first congenital defects diagnosed, and a major cause of concern for the medical team and parents were Esophageal Atresia (EA) and Tracheoesophageal Fistula (EA/TEF) where food could not travel past the first portion of the esophagus, and Duodenal Atresia because that made it impossible for waste to travel out of the body.

Upon delivery, baby Jack was rushed from a community hospital to a nearby specialized Children’s Hospital, and within 24 hours, had his first surgery. During this surgery, Jack’s liver started bleeding, and his parents were informed there was only a 50/50 chance he’d make it through the surgery. He persevered as they were able to disconnect the esophagus from the trachea and place a gastrostomy tube (G-Tube) to vent his stomach. From there, Jack spent the first of many long nights in the Neonatal Intensive Care Unit (NICU). 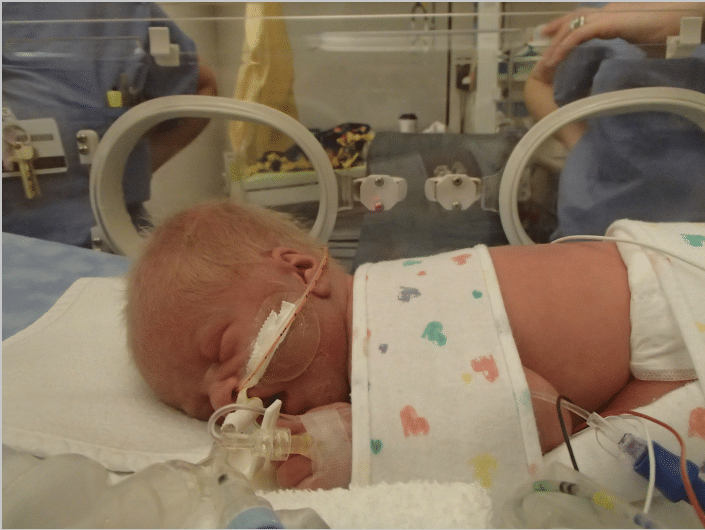 Jack in the Neonatal Intensive Care Unit (NICU).
It was during the NICU stay that more tests were conducted that led to the diagnosis of Choanal Atresia, Tethered Spinal Cord, bilateral grade 3 Intraventricular hemorrhage (IVH) in the brain, and hypospadias. “Once they were able to get something in his stomach to vent it, we learned he didn’t have to have everything from the additional conditions repaired right away,” said mother Amanda. “We had some time to wait for him to heal, and he was able to be fed intravenously.”

Jack spent his first four months in the NICU where he was able to have the Duodenal Atresia and Choanal Atresia repaired. He was able to go home and received additional home health care, until his return at six months for the surgery to repair his Esophageal Atresia including a one-month recovery, and again at 12 months for his spinal cord. Fast forward through several successful surgeries and recoveries, Jack continues to battle respiratory illnesses and pneumonia due to his early conditions and prematurity. It was a stint with a respiratory infection where Jack experienced and was able to verbalize his discomfort with an IV. 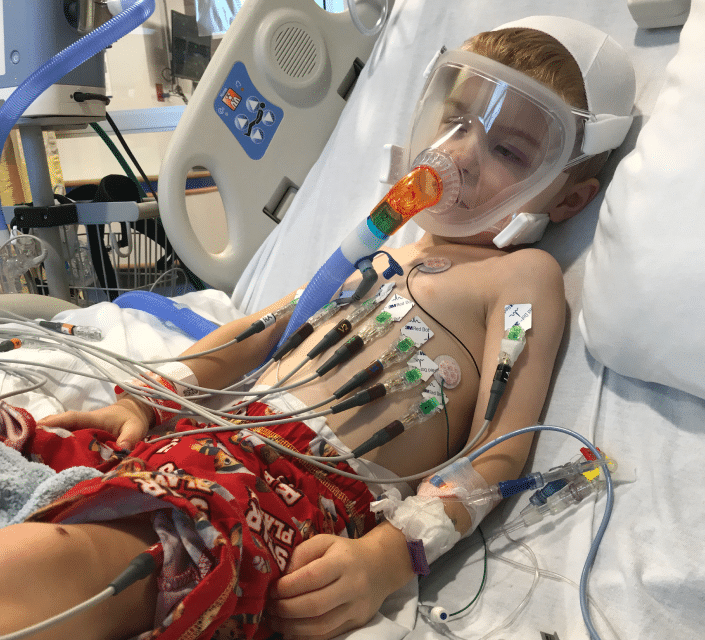 Jack, age 4, during a hospital admission for a respiratory infection.

“He was receiving antibiotics and fluids for dehydration, and when a nurse came in to flush it [his IV], and he said it hurts, they were just under the assumption that he didn’t like the way it felt.”

Mom Amanda recalls the nursing staff being very attentive and doing their regular Touch, Look, Compare assessments. He had let them know his IV was hurting, but the nurses decided to keep it in since there weren’t any signs of infiltration at the time. “But he just kept saying that it bothered him, and eventually after a few hours, it [the area around the IV] swelled up to the size of a golf ball.” Jack is notorious for being a hard stick. He would have IVs changed because the nurse would be unable to flush or draw blood. However, this was his first confirmed infiltration. Since then, the Children’s Hospital that has taken care of Jack has implemented a technology to help nurses detect infiltrations. “With the technology, we are alerted if an IV is going bad [infiltrating] in real-time. That helps us prepare Jack for what’s coming up instead of [a nurse] just coming in, stopping it [the IV] and pulling it out.”

Amanda says speaking up as a parent is important. “You have to be there, and you have to speak up for them. And you know your child, so you know what’s going to make them comfortable and what works best for them.”

Jack’s parents have gained hard-fought perspective and experience in the hospital setting and wish to share their story so it might help others who are facing similar circumstances. Whether it be prepping your child for an IV insertion or knowing that a more costly IV Tylenol works for your child, parents are instrumental in making the experience as comfortable as possible.

“It’s the little things like that that may not seem completely obvious until you’re in the setting, that really goes a long way to helping you act quickly.”

Learn about How to Prepare your Child for an IV and the Ways to Prepare and Care for an IV. 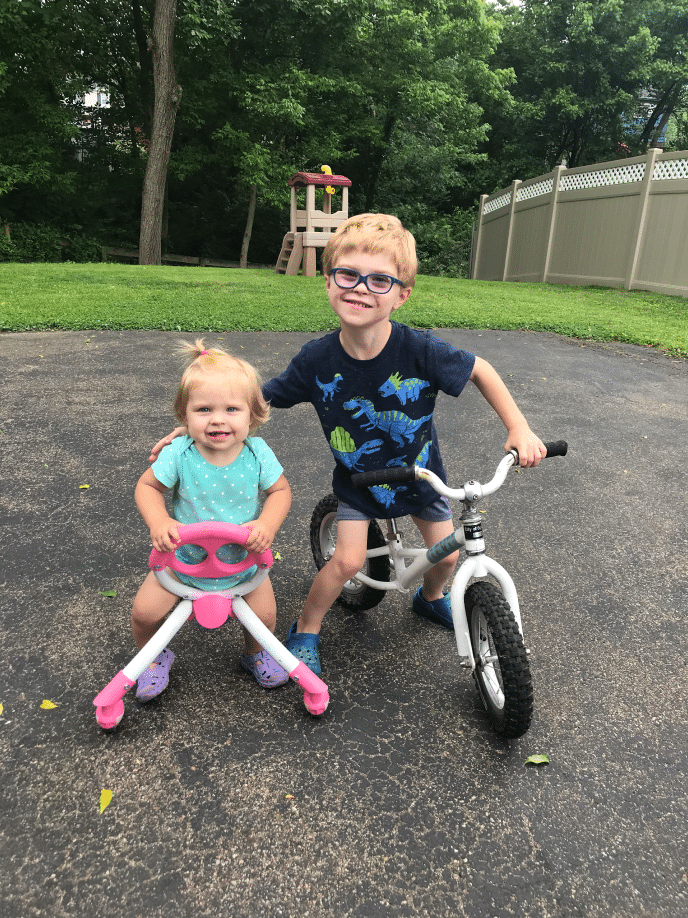 Jack with his sister, Olive. 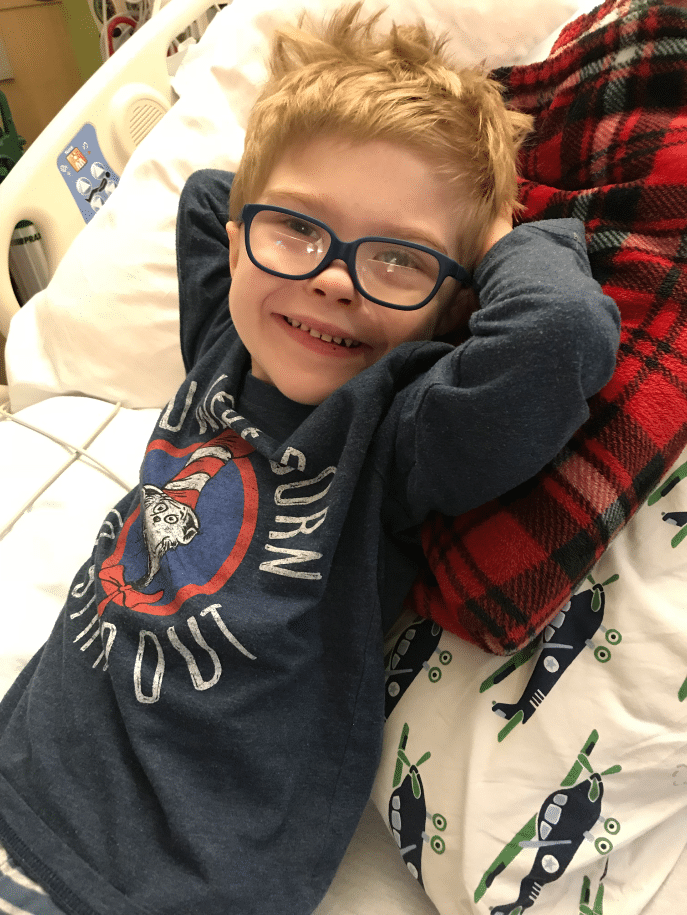 Jack, age 5, during a hospital stay.

“If you read his medical history and then see him, people say, oh my gosh, he looks way worse on paper than he looks in person.” By all accounts, Jack is thriving. He is starting kindergarten. Jack runs, keeps up with his friends, and does many of the everyday activities his parents were told he may never do.